The Economics of Accurate Geolocation Technology for iGaming

Home / Press / The Economics of Accurate Geolocation Technology for iGaming 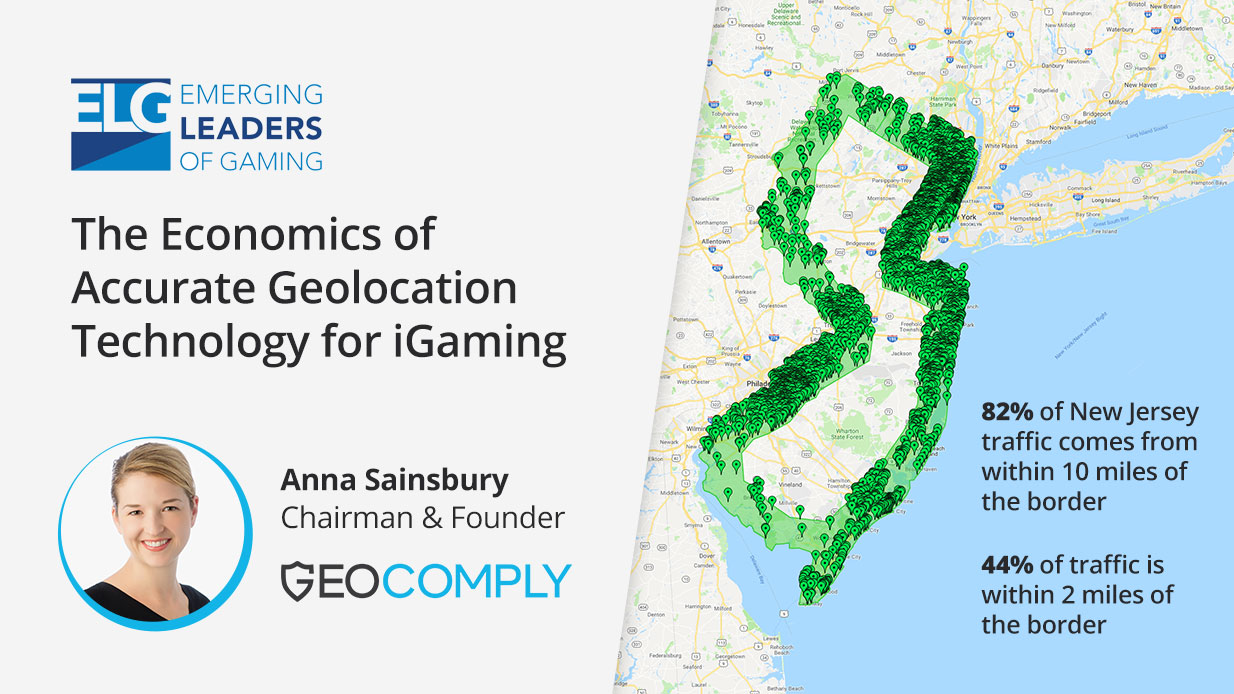 In this new article, Anna Sainsbury, discusses the importance of accurate geolocation technology in order to maximize the economic impact of iGaming in a state.

The Economics of Accurate Geolocation Technology for iGaming

Geolocation compliance and the technology that enables it is one of the cornerstones of the regulated online gaming industry. With current Federal laws such as the Wire Act and Unlawful Internet Gambling Enforcement Act (UIGEA), the legal and financial consequences for allowing a player to place an online wager outside the boundary of a regulated state is extremely serious, let alone the irreversible damage that would be caused to stakeholder integrity.

State regulators and operators would rather err on the side of caution by blocking a legitimate player who may be on the right side of the border, than to allow an illegitimate player to place a bet who’s on the wrong side. Sounds reasonable, right? The amount of “buffer zone” that’s required is often part of the state regulations, which the geolocation compliance vendor and operator must adhere to in the implementation of the technology. This buffer zone also takes in to account the accuracy of the geolocation technology that is being used.

The accuracy of the geolocation compliance technology that is implemented plays a major role in terms of the amount of buffer zone or the “margin of safety” that the regulator builds into its requirements and system specifications. A system with lower accuracy or a lower degree of confidence in the accuracy of the geolocation data will require the regulator to specify a larger “safe” zone, and in turn reduce the size of the addressable market.

When a state is considering online gaming, one of the first steps they take is to complete an economic impact assessment (EIA) – a now common research tool used by state governments and regulatory bodies to understand the market potential of introducing online gaming in their jurisdiction, along with the related risks and policy considerations. Among other factors, an EIA includes potential taxation models, licensing schemes and responsible gaming considerations.

One of the most important aspects of an EIA is market forecasting, which includes the state’s population, player demographics, location and behaviors, and contributes to creating a revenue model for the state. When a state is building its revenue model, it normally assumes that it will be able to service 100% of the population of eligible players, regardless of where they are physically located within the state, in order to maximize the revenue contribution to state coffers from online gaming.

However, in many U.S. states, a large percentage of their population is located very close to the border with another state. A good example is New Jersey and New York. 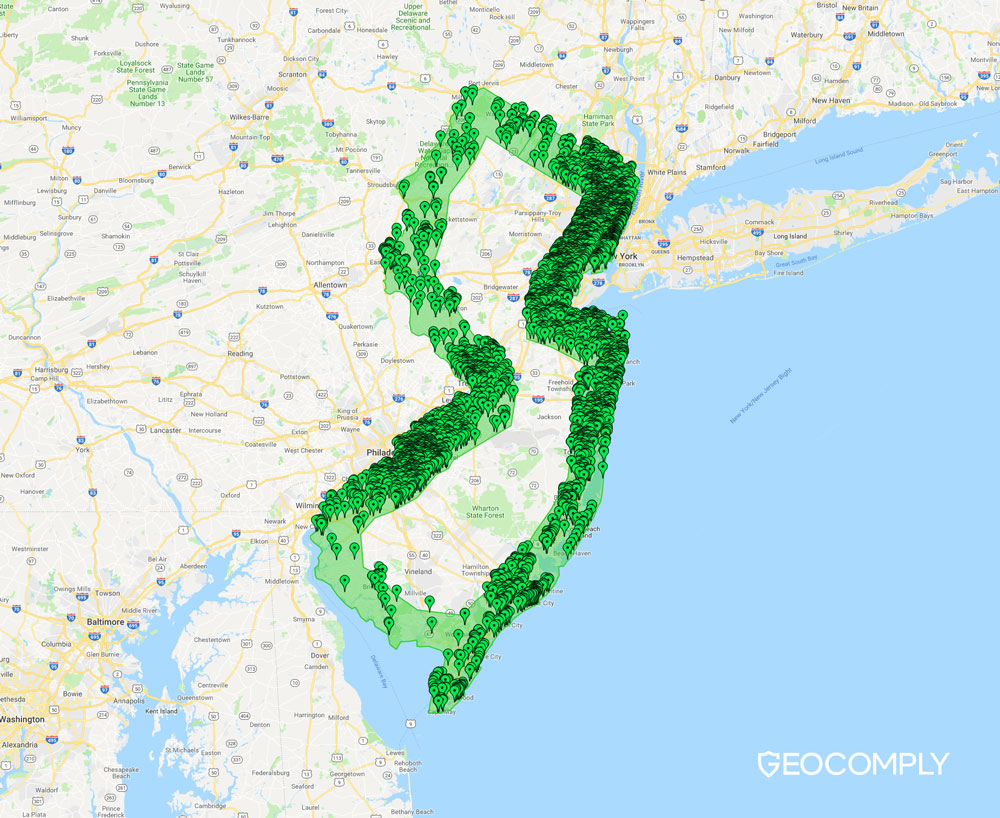 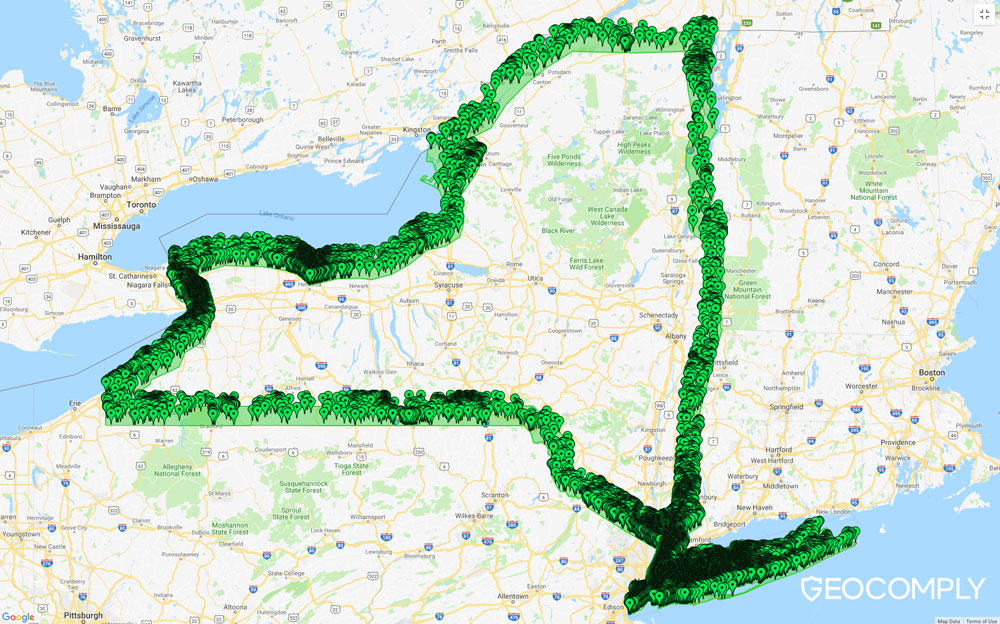 Each pindrop on the map represents a unique location verification check, which includes a number of different data points. Since compliance grade geolocation utilizes a number of techniques such as Wi-Fi triangulation, GPS coordinates and cell tower triangulation, the geolocation accuracy is determined by aggregating the weighted accuracy of the data points related to the different techniques employed in any particular geolocation validation of a player. 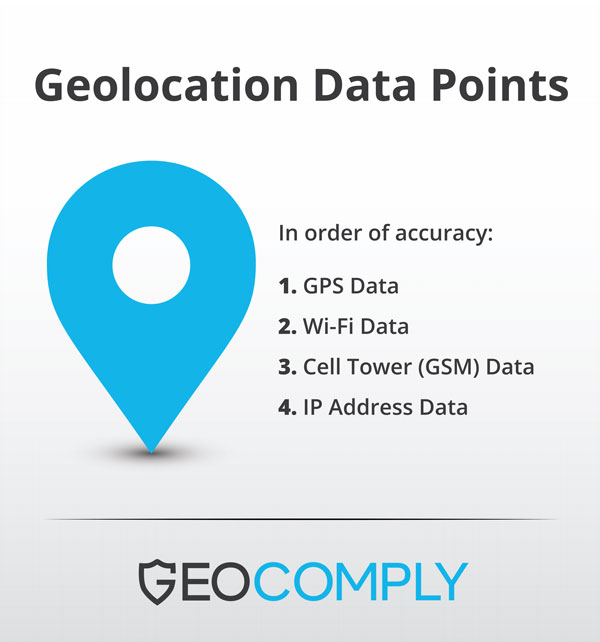 The inherent accuracy of each geolocation technique varies widely, with GPS and Wi-Fi data being the most accurate, and IP address data the bare-bones minimum and least accurate. However, based on the actual location of a player, a complex calculation is performed in real-time using all the available data points to determine whether the player passes or fails the geolocation check.

The quality and accuracy of the geolocation compliance technology being utilized therefore has a significant impact on both the addressable market that is available to the state and the revenue potential. For example, if the geolocation technology places too much weight on the relatively inaccurate location data provided via a mobile device’s use of GSM cell tower triangulation, this would increase the “buffer zone” to potentially 3 miles from the state border, eliminating a significant number of players.

In New Jersey, where 44% of traffic is within 2 miles of the border, this could effectively shrink the addressable market from a 9 million total population to a less than 5 million total population. Without employing a “best of breed” geolocation compliance solution, the state would not achieve the revenue targets set out in the EIA.

New York and New Jersey Are Not Unique

Many other states that are launching mobile iGaming and sports betting share similar characteristics to New York/New Jersey such as the suburbs of Portland, Oregon being just a stone’s throw across the Columbia River from Washington State, or the residents of Washington D.C. being within walking distance of Maryland.

Additionally, the mobile nature of iGaming means that the geolocation compliance solution must be highly dynamic to recognize and track changes to a player’s location, which could transition from one jurisdiction or state to another, during their wagering session. There’s much more to the technology that goes into a geolocation solution, both real-time and historical data as well as the “breadcrumbs” needed to facilitate the review of player data to recognize fraud or other improprieties when they happen.

Implementing a highly accurate and “best of breed” geolocation solution is not only important for compliance with all applicable state and federal laws, it’s critically important to helping states reach their full population of eligible players and achieve the planned revenues that online gaming can provide.